The recently anointed 3-Michelin-star chef sets the bar for cultivating a sustainable cuisine and the use of regional products when he is not tweaking cooking methods and flavor compositions. 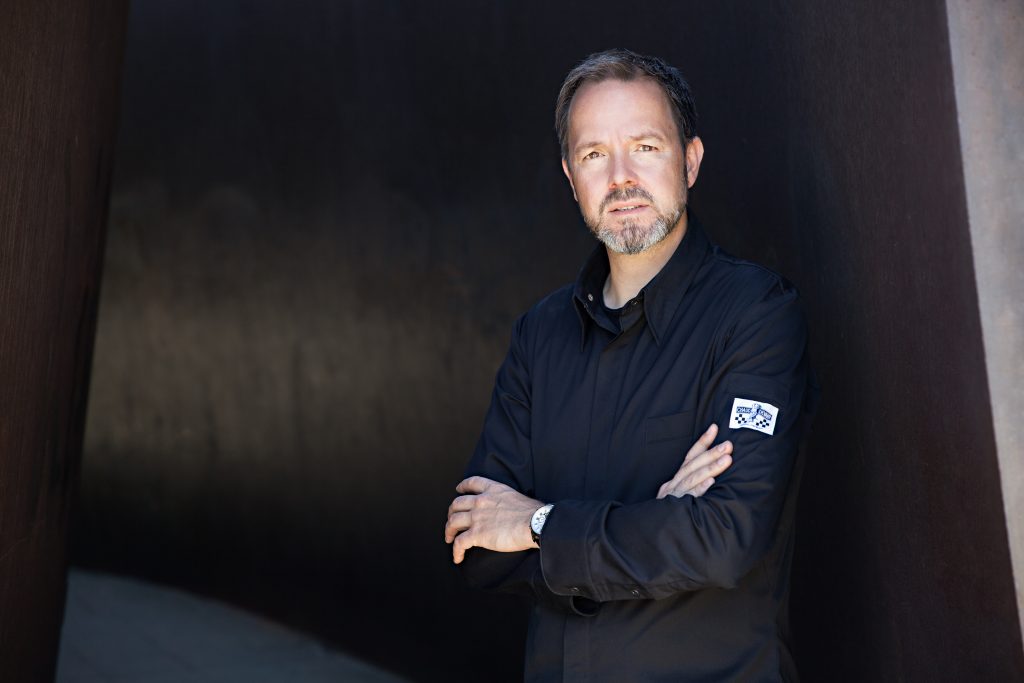 Mr. Müller, as “executive chef” at the restaurant and wine bar “Rutz” you are in charge for both establishments: The restaurant upstairs, which claimed three Michelin stars in March 2020, as well as the secondary restaurant – the wine bar – downstairs.  Both emphasize strong regional aspects. The wine bar’s menu is even captioned “The rescue of the German cuisine”. Why do you have this passion for regional cuisine?

Maybe it is because I lived in the countryside for a while during my youth. When I was ten, my parents moved from Potsdam to Geltow, a small village near Werder upon Havel. My grandparents had a house there: the riverbank in the front, garden in the back, with lots of fields, meadows and woodlands all around. Grandfather grew all kinds of vegetables in the garden, even old strains. What we did not have, we got from neighbors and friends.

From these, my mother, who was a passionate cook, created fantastic dishes. I liked to cook too, although I did not know back then that I would be a chef some day. I would foray for mushrooms in the forest and I had a fishing license. Even as a boy, I knew how good a fresh European perch can be.

How did you come to be a chef?

I wanted to become a sculptor. The circumstances in the GDR however, did not permit that. In the workers’ and farmers’ state I had to learn a craft. I apprenticed as a chef in Potsdam, and when I finished, the Berlin Wall fell.  I felt the call of Berlin. At first I worked at the Palace Hotel in Berlin-Grunewald, back then it was still called “Gehrhus” and practiced a classic French cuisine: foie gras, Périgord truffle, Breton lobster and Russian caviar. At first, I was impressed by the expanded product range. In the 1990ies, the local haute cuisine was heavily influenced by the French Grand Cuisine.

Shortly after, when I began cooking in the “Grand Slam” under chef Johannes King, who back then held one Michelin star, I gained a different perspective. King grew up on a farm in the Black Forest and knew about good regional products, even though he had learned old-school French cuisine, among others from the legendary Herny Levy at the “Maître” in Berlin. In the mid-1990ies however, King began to buy from Brandenburgian farmers and herbalists. That was an eye-opener for me.

When did you resolve to value regional product world as a chef yourself?

In 1999, I was chef in the “Harlekin” at the “Hotel Esplanade” in Berlin, and was awarded a Michelin star. I still cooked close to French cuisine, not least, because the hotel willed it so. Lars Rutz was the restaurant manager. He said to me: Let’s find a concept for a restaurant, where we can do whatever we want, where we can cook young and contemporary, less formal but with first-class food and wine, with a regional product philosophy and German wine. Sustainable. Authentic. He really pushed this idea and found the Berlin-based wine vendors Anja and Carsten Schmidt, who consented to manage the new restaurant. The “Rutz” with wine bar and restaurant opened in 2001. I was not ready back then to part with the “Harlekin”, so Ralf Zacherl became the „Rutz’s“ first chef until 2004, when I took over.

Your style of cooking has changed much since then.

At first, I experimented a lot. I tried to find myself. We tried and dared much, influenced by the molecular gastronomy of the time. We served fonds in test tubes or vegetables in canning jars. We loved multiplicity, which manifested not only in the dishes, but also the service within the entire house. The same kitchen produced dishes both for the wine bar and the restaurant, which offered two set meals and à la carte service. We started with four cooks and put up with brutal working hours. It could not go on like that.

We started to increasingly structure our work and we hired more cooks. After the renovations of 2011, we got rid of the à la carte service in the restaurant and only offered one set meal, first with 12 courses, which we reduced further. Today, our guests can choose between 8 and 6 courses not counting the amuse-gueule. All these changes were developed with the guests. They did not care for all the fuss about everything. Now it is all about a pleasant evening and the extraordinary that can be found in details.

We concentrated increasingly on the bare essentials: product substance, not product range. As a rule, a course consists of three or four main ingredients, served on a tranquil round ceramic plate. This allows the guest to take stock of what is served and appreciate it. There is no need to get nervous. The restaurant manager – nowadays Falco Mühlichen – and his staff explain the concept behind the meals or the ingredients’ source, they enrich the meal with a little story. In accordance to the guest’s wishes this introduction can be longer or shorter. Wine or non-alcoholic beverages accompanying the meal are fine tuned as precisely as possible to the specific dish by our sommelier Nancy Großmann. 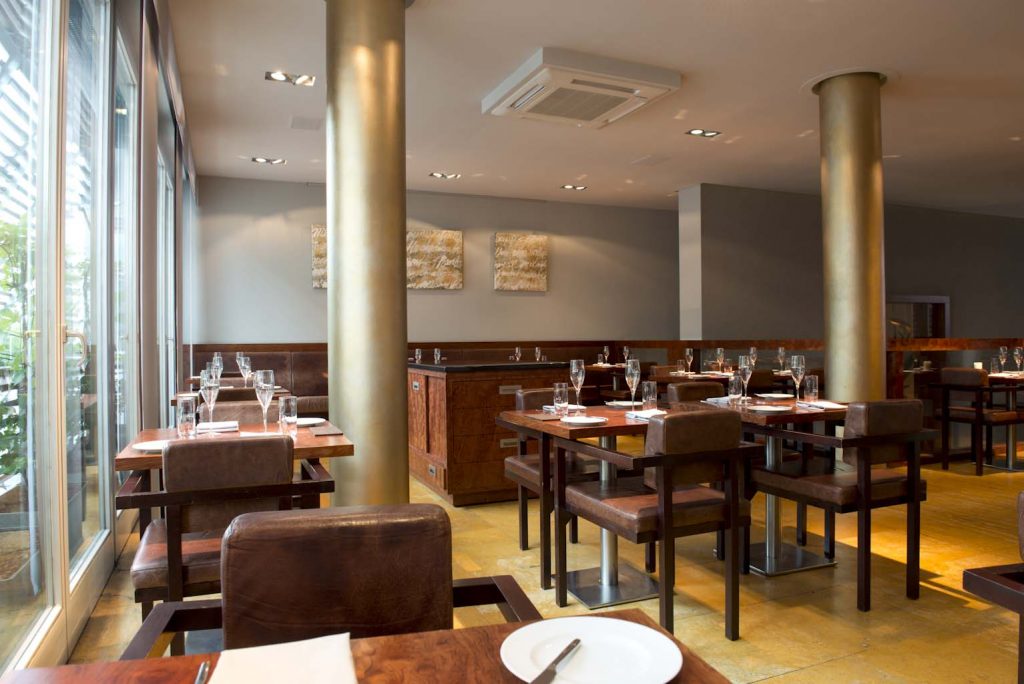 Where do you get good regional products from?

Because we only serve 8 or 6 courses, we need fewer products than before and can afford to take more time selecting each one. We are constantly discovering crop, cattle and fish farmers, as well as fishermen around Berlin. We also strive to improve products together with the producer. Be it vegetable, fruit, fish or meat: We discuss the best strain or breed with the producer, but also the best growing method, keeping and feeding of animals, even the best way to butcher the animals and mature the meat. It took five years until the veal we procure from a farmer in Brandenburg had the desired quality.

Not only do you tweak the products together with the producers, you also experiment in your kitchen with cooking methods and flavor compounds. The veal on the plate possesses a juicy luster, is unbelievably tender, yet not without a certain resistance. The taste is smooth, with faintly sweet caramel flavors contrasted by gentle yeasty and fruity notes. Captivating in its complexity. How do you do that?

We were looking for something that enhances the singular flavor of veal without overwhelming it. We had the idea to try koji fungus, a fermentation agent, which adds a subtle, morbidly yeasty note. First, the veal fillet is marinated in koji-miso paste for a few minutes. The paste is then dabbed off and the meat can rest for a few hours. It is sous-vide cooked in a vacuum bag at 57°C water temperature, then fried in a pan with butter, in order to add some tension to the tenderness and produce the caramel notes. And here is what happens on the tongue: First the smooth veal, then caramel yeast complemented by a morbidly-fruity touch of dried pear, which we grated onto it.

An enchanting moment for the guests.